Welcome to the Barrel

Sometime two years ago, there was a particularly bad day. It was one of those days that seemed especially irrational, so irrational that it didn't make sense anymore.

So my internal response was a wish to be absolutely irrational in return, and the only thing that came to mind was at every question that would come my way, I would yell, "Because I'm a Monster!"

In the middle of that day, I opened up the glory that is MS paint and drew my irrational insides. It probably took me just a couple minutes, and a majority of that time was most likely spent on what color to make his shoes. 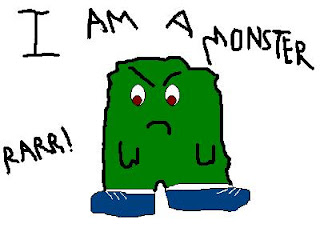 Six months later, I came home from another “Because I’m a Monster” day. I wanted to look at something cute – anything cute – and ended up opening the Glory that is MS Paint and drew Monster again.

I got so depressed partway through that I decided to throw in something – anything – to make the picture more cheery. So I gave the Monster a friend. Bunny.

So, Monster wasn’t alone on the boat, or on the hill.

By the fourth panel, he wasn’t even scowling anymore. 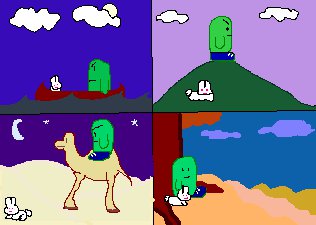 So, Monster might have started on a really bad day in May 2010, but I think it was when Bunny entered the picture that the whole barrel really started rolling.

Welcome to Monster Barrel. It's not all Monsters. Sometimes it's Irate Stick People. But hopefully some of it will be funny.