Sometime ago, I had a comic idea about a guy who goes into an interview for a position, but he goes in under the unclear guidance from a hiring company, who had only told him that the company he was applying for "made video games," He knew nothing else. He went to a big blocky building in Kirkland, and couldn't find info about the video games around the lobby or front office area, but he's called into the interview, and is in front of a panel of people.

Faced with the question, "What do you like about our game?" the hapless interviewee finds himself BS-ing his way through, and just makes up a fake video game. He talks about the "riveting conflict" and the "tragic back-story" and the "amazing character development" and just makes a bunch of shit up. At one point, he's interrupted by someone who asks, "Do you even know what we do here?" And the interviewee, still riding his creative high from his made-up glorious game, retorts back, "DO YOU???" In the end, he stomps out of the interview, declaring that his idea for this awesome game is "MINE-ALL-MINE!" and he runs away.

Later, his roommate finds him at his laptop, posting fanart for his own made-up, still non-existent game "Trash Can Terror," which is about a rancid trash can and a recycle bin that fight crime. "You already slashed them??" his roommate asks, pointing at the screen to a messily drawn picture of the recycle bin slowing entering the trash can's opening. "You're making...porn???"

"It was going to happen anyway!" yells the failed-interviewee as he draws another panel. The Recycle Bin is blushing as he sinks down into Rancid Bin's warm, enveloping heat. "I call them Rancycle."

This whole thing came out of me almost applying to a nebulous job that only referred to the employer as "Game Company in Kirkland" but demanded throughout the job requirements that you would need to have "extension knowledge and love of the company's (unspecified) game."

But like my failed interviewee, I got so caught up in the thought of the fake video game, that all I came up with in the end was my slash Rancyle pairing. 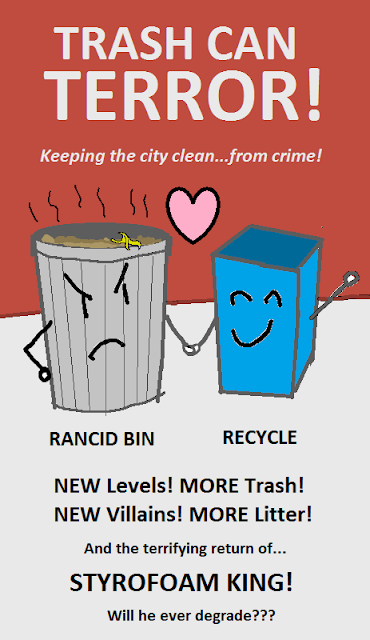